Is Using A Hair Relaxer A Good Idea? 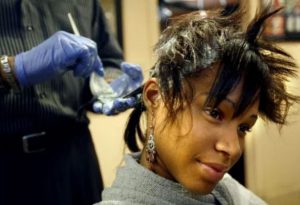 I have been using a chemical relaxer for more than 30 years until recently, the last 4 years, I have stopped using them and have embarked on the natural hair journey. It is no secret that EVERY woman aspires to look her best and sometimes will make sacrifices of all kinds:

Just a short list of what women do to look their ‘hairy’ best!

There are some women who have ‘unruly’ hair and they use ‘hair relaxers’ to make their hair more manageable. The use of these relaxers should be applied to virgin hair and then in average 6-8 weeks, a new application to the new growth. Of course, not all women follow the rules of this hair treatment and sometimes, the results can be serious to these misusers:

What Are Chemical Relaxers?

Chemical relaxers are creams created to alter the texture of one’s hair. This is done by combining certain chemicals which will permanently alter the hair bonds and make them elongated and devoid of a curl pattern.

According to Wikipedia, ‘A relaxer is a type of lotion or cream generally used by people with tight curls or very curly hair which makes hair easier to straighten by chemically “relaxing” the natural curls. The active agent is usually a strong alkali, although some formulations are based on ammonium thioglycolate instead.’ [1]

The first documented article about relaxers and their use was when Garrett A. Morgan discovered a way to straighten hair in 1909. He stumbled upon the concoction while he was trying to find a solution to ease the friction of a sewing machine in his shop. His first test subject was his neighbor’s dog’s fur. After this, he established G.A. Morgan Hair Refining Company and started selling the product to Black people.

There are a few different types of chemical hair relaxers:

is a measure used to determine the acidity and alkalinity of a substance. The scale is represented by numbers ranging from 0 to 14 where 7 is neutral. Greater than 7 on the pH scale is more alkaline and less than 7 is more acidic. The pH of hair ranges between 4.5 – 5.5. Lye relaxers range from 12 – 14 and no-lye relaxers range from 9 – 11.

What Is The Makeup Of These Relaxers?

With the initial reports about chemical relaxers being a possible cause for cancer, manufacturers were changing the ingredients to ‘reduce’ the effect. One of the more common ingredients is the lye chemical. Manufacturers started making lye and no-lye chemical products in an effort to keep their products and not to have a negative effect on their sales despite the reported findings.

Here are the basic ingredients for a well-known chemical relaxer:

Of course, the ingredients have changed over the years, however, sodium hydroxide is still there even in this ‘mild formula’.

The chemical relaxer can be applied professionally in a hair salon under the skilled hands of a hair stylist or by yourself with the help of a home kit. Of course, there are factors governing your decision of either and the primary factor being ‘cost’ of the application. As ‘bad’ as chemical relaxers may seem for your hair, it is still important to outline the advantages and disadvantages in order to help anyone make an informed decision – it’s only fair.

Surely, one will wonder if there are any advantages to be gained from using a hair relaxer on one’s hair – I have compiled a list of a few which I think might merit using it as a solution to one’s hair challenge. Of course, I write these advantages under the assumption that the chemical relaxer will be correctly administered by a professional hair stylist, at least for the first time. It:

As with anything in life, there will be good things and not so good things to help make a decision concerning the final choice. This is no different as we discuss chemical relaxers. Here is a list of what I consider disadvantages to using a chemical relaxer:

Are These Relaxers Linked To Cancer-Causing Agents?

Quite honestly, anything is possible. Improper use of any chemical WILL have an adverse effect on anyone’s health and well-being. It is not easy to ‘point a finger’ and definitively say, ‘yes’. In order to do so, one would have to compile tons of evidence based on solid research and results in the negative effect.

In my opinion, I would rather be safe than sorry. It is true that I decided to leave ‘the creamy crack’ behind after so many years, however, it is a choice I made for my personal reasons:

I am sure you will have your own reasons too for your decision either way. I have no regrets. I can only hope that it was not too late and I have been spared from any possibility of having contact with any cancer-causing agent not yet fully proven to be undecidedly a cancer-causing agent from using or having used any chemical relaxer products.

As one can never be sure of what ingredient will be a causative factor in any product – whether on its own or used in combination with another chemical. I implore you to be careful and start practicing the art of reading labels for all products – not just for your hair, but for everything. Having a sense of awareness is always a ‘good thing’.

I welcome any feedback you might have on this discussion.

Report – Relaxers Are Linked To Cancer ( Taken from Voice-online.co.uk)

‘Ingredients in dyes and treatments linked to number of health problems, research says

HEALTH RISKS: Hair straightening products and hair dye are a cause for concern

WOMEN WHO regularly chemically straighten their hair or dye it dark brown or black have an elevated risk of breast cancer, according to recent US research.

The results were published in the research journal Carcinogenesis.

After reviewing the findings, Harvard epidemiologist Tamarra James-Todd, who was not involved with the new research, said:

“I would be concerned about darker hair dye and hair straighteners.

“We should really think about using things in moderation and really try to think about being more natural. Just because something is on the market does not necessarily mean it is safe for us.”

The association between relaxers and breast cancer in white women surprised lead author Adana Llanos, an epidemiologist at the Rutgers School of Public Health in Piscataway, New Jersey, although she worried enough about the safety of hair relaxers in African-American women, like herself, to stop using them years ago. She said:

“A lot of people have asked me if I’m telling women not to dye their hair or not to use relaxers. I’m not saying that. What I think is really important is we need to be more aware of the types of exposures in the products we use.”

The study included adult women from New York and New Jersey, surveyed from 2002 through 2008, who had been diagnosed with breast cancer, plus women of similar age and race, but without a history of cancer. Women were asked if they had ever used permanent hair dye at least twice a year for at least a year. They were also asked if they had ever chemically relaxed or straightened their hair for at least a year. While the vast majority – 88 percent – of black women had used chemicals to relax their hair, only five percent of white women reported using relaxers.

Among some of the key concerns found by the report were the presence of chemicals such as formaldehyde, used in many hair straightening products, ammonia, which is used in hair dyes and bleaching agents all of which have been known to cause breathing difficulties and occupational asthma.

The report also cites research that deep-coloured dyes used over long periods are thought to increase the risk of both non-Hodgkin’s lymphoma and multiple myeloma.’

2 thoughts on “Are Chemical Relaxers Linked To Cancer?”